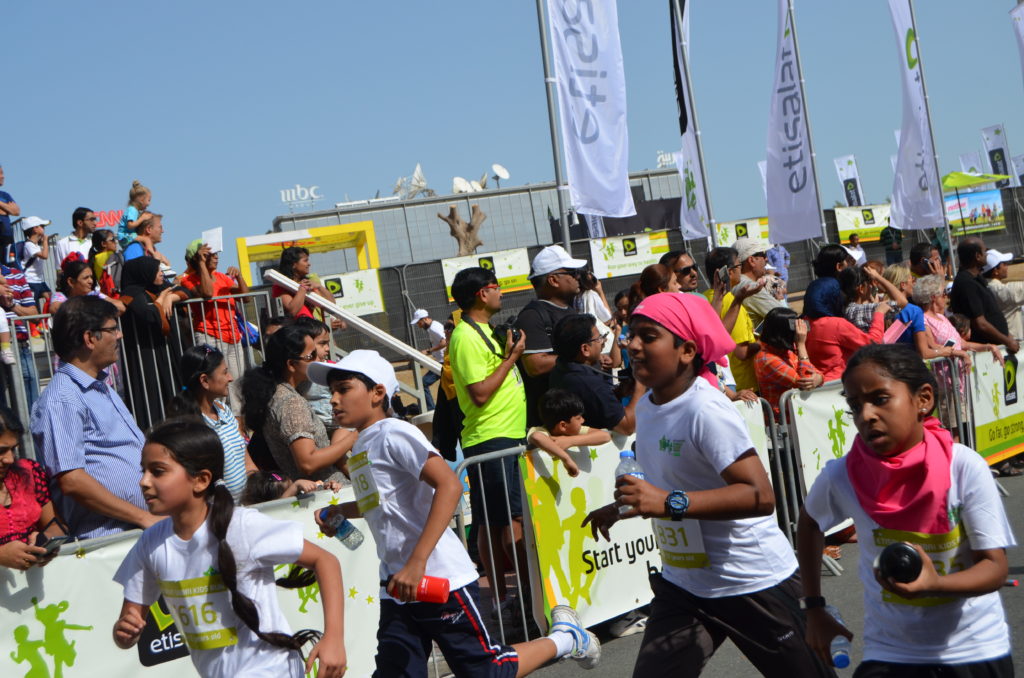 In an effort to educate the UAE’s youth on the importance of healthy eating, regular exercise and an active lifestyle, the first ever Dubai kids’ run was launched.

The two-day event – which took place over the weekend – was organised by CPI Media group, and the UAE Athletics Federation. The UAE’s telecommunications company, Etisalat sponsored the race that was held at Dubai Media City’s outdoor Amphitheatre.

The race brought together the kids of Dubai in a social and fun activity that embodies a strong community spirit.

The 2 kilometer-long race catered to two groups of children. The first race started at 9:30 am and was for kids between the ages of nine to twelve. Children from ages four to eight years old ran straight after that, accompanied by their parents.

Liesa Euton, Race Director says: “We wanted to have a smooth course for the children – not too long and not too short – because we want to give them just a little bit of a challenge.”

Collectible medals were given to all the participants at the end of the adrenaline-filled race.

The first-place winner from each race category received an IPad Mini and a hamper including a variety of gadgets, gift certificates and a three-month gym membership.

The top five winners from each category have also received goody bags worth over 3,500 AED.

The event attracted more than 5,000 people, amongst cheering parents and active children.

With more than 2,000 kids participating in the race, the Etisalat Dubai Kids’ Run will be an annual event in the Dubai calendar.

Ahmed Kamali, President of the UAE Athletics Federation says: “We put this run in the calendar, so that it’s going to be like any of the future races; like Dubai Marathon for 17 years, and Dubai Women’s Run for the last 6 years. So hopefully, we are planning to have this forever.”

“He plays football with his coach, who trained him for two weeks only.” Raedan’s mother says.

“He’s a very active boy; he plays football and cricket.”

Raedan’s coach trains a group of kids at Dubai’s Zabeel park as a part-time hobby. The kids run around the spacious park and play football two or three times a week.

The Etisalat Dubai Kids’ Run proved to be a successful initiative to promote healthy living and fitness amongst the tech-savvy and modern Dubai kids.

An even bigger step forward can be taken by eliminating the unhealthy snacks and sugar treats that were served at the fun fair after the race.

Hopefully, future events will include a variety of healthy snacks, treats and smoothie stands.